Another Code Wiki
Register
Don't have an account?
Sign In
Advertisement
in: Article stubs, Characters, Hotel Dusk: Room 215,
and 3 more

Kyle Hyde (カイル・ハイド) is the protagonist of the Kyle Hyde Saga. In the games, he appears as a bitter ex-detective who works as a salesman for the company, Red Crown. Kyle comes across numerous mysteries that turn out to have connections to incidents of his own interest in most cases. Solving them requires the otherwise not as sociable man to investigate the lives of various people.

Kyle Hyde was born in Los Angeles as the son of Chris and Jeanie Hyde. His father, Chris, a safe-cracker was killed when Kyle was nine years old. Afterwards, Jeanie and her son went to New York. In 1968, Kyle became a member of the New York City Police Department at the age of 22. In 1976, Kyle and his partner and friend Brian Bradley were investigating the criminal organization, Nile. When Kyle learned that Bradley was betraying the police department to Nile, he confronted Bradley at the docks and shot him. Right after that, Kyle quit the police force and moved to Los Angeles. There the ex-detective was employed as a salesman by the company Red Crown. However, Kyle was sure that Bradley survived, and so he didn't stop to track down his former partner.

During the events of Hotel Dusk: Room 215, which take place on December 28, 1979, the boss of Red Crown, Ed Vincent, orders Kyle to drive to the Hotel Dusk, where he has to receive a package with the instructions. In the hotel, Kyle meets many people that confront him with their own stories, and at the end he finds out the reason behind Bradley's act. It turns out that Bradley's sister Mila was taken hostage by the criminal organization Nile. As they threatened to kill Mila, Bradley followed Nile's instructions. However, they murdered Mila nonetheless.

Kyle appears as a trophy in Super Smash Bros. Brawl where he is unlocked by beating All-Star mode with every character. He also appears as an unlockable sticker, along with other Hotel Dusk characters. The description for Kyle's trophy is as follows:

"A former detective working as a salesman for Red Crown, a door-to- door sales company. Kyle also searches for any trace of his long- lost friend and colleague, Bradley. Although cool and suave, Kyle tends to let himself go in the midst of his obsessive behavior. The Red Crown president's secretary, Rachel, often gives him grief about his destructive habits."

In Last Window: The Secret of Cape West, Kyle gets fired from Red Crown on December 18, 1980. He returns to the Cape West apartment building where he lives. There he finds a mysterious letter that tells him to find the Scarlet Star. During the course of the game, Kyle solves the mysteries behind his father's death. It is currently unknown what happens to Kyle after the events of Last Window: The Secret of Cape West. There is a possibly that there will be a third Kyle Hyde game according to one of the people who developed the game but, it is unknown how it will happen in the future. Because of the issue with Cing being bankrupt.

Kyle appears as a spirit in Super Smash Bros. Ultimate, which uses art from Last Window: The Secret of Cape West. He is a Defense spirit.

The battle has the player facing against Snake. The stage is Fourside. The stage itself is possibly representing New York City or Los Angeles, the locations featured in Hotel Dusk and Last Window.

Kyle stands at 6'0" and has a slim but sturdy build. Kyle has brown hair, grey eyes and a beard. Players can be easily fooled that he has blonde hair in gameplay sections of Hotel Dusk: Room 215 and the sequel because it looks very bright. His beard may have been done to replicate the beard of Satoshi Okubo, the composer for Hotel Dusk and Last Window, who had a beard similiar to Kyle's.

In Hotel Dusk, Kyle wears a "Red Crown" jacket, along with a white dress shirt and a black tie. In Last Window: Secret of Cape West, Kyle has a black suit and he looks thinner. This suit is mentioned in the previous game by Louis Denonno, who comments on the fact he is not wearing it.

During Hotel Dusk: Room 215, Kyle is a serious and collected man, usually being a non-impressionable person in general. He is often very sarcastic and impatient when it comes to listening to people's problems. Due to the mysterious incident with Bradley, he shows certain sense of feeling lost, but always keeps his mind focused on discover the truth about it. He doesn't really like kids very much, being kinda strict with Melissa, a 10-year-old living in the hotel. He also has destructive habits. Despite his serious attitude, Kyle is a person with a certain sense of justice, often getting involved in resolving certain problems and mysteries, even after he left his life of a being a full-detective. Back then, Kyle was stated to be calm, commanding and meticulous. He can feel empathetic to other people, like with Mila Evans, a young girl who was in the same situation as him. He states that a little girl like her shouldn't have to deal with a situation like that. At the end of the game, he lets her come with him to Los Ángeles.

In Last Window: The Secret of Cape West, after resolving the case about Bradley and now being placed in a more personal adventure, Kyle shows a more calm personality and even more compassive. He listens to other people's problems very often and does his best effort to remediate the problems within the Cape West tenants. He shows to have certain mixed feelings about his father's past. In general he shows a more compressive and relatable side of him, usually remembering events of his past as he listens to other people, like with Marie Rivet, who reminded him of his mother the day he left his home, where she told him that she was strong by herself and she could handle it alone. Even with the "conflictive" people like Will McGrath, Dylan and even Margaret Patrice, he shows attempts to keep them out of legal problems.

He enjoys food, often taking time before eating to look over his meal and describe it to himself in an internal monologue. He rarely makes attempts to cook for himself, however, often eating at the diner in the Cape West apartment building, so much so he has a regular table. 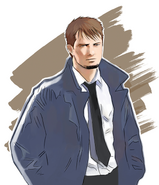 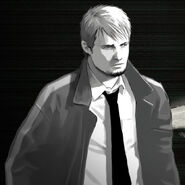 Kyle in the official boxart of Hotel Dusk: Room 215. 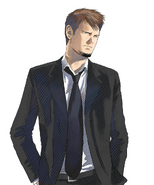 Kyle in Last Window: The Secret of Cape West.

Kyle in Last Window: The Secret of Cape West. 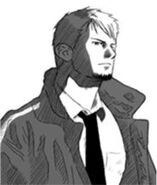 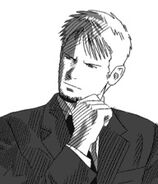 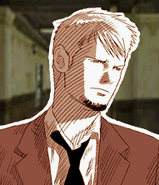 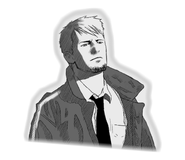