This article is about the game. For the titular place, see Hotel Dusk (place).

Hotel Dusk: Room 215, released in Japan as Wish Room: Tenshi no Kioku (ウィッシュルーム 天使の記憶, lit. "Wish Room: Angel's Memory"), is an adventure game developed by Cing and published by Nintendo for the Nintendo DS. It was released in 2007 and is the first game of the Kyle Hyde Saga. The game was later republished in 2008 as part of the Touch! Generations line of DS games. A sequel titled Last Window: The Secret of Cape West was released in 2010 for the Nintendo DS.

While Hotel Dusk is not directly a part of the Another Code series, it was created by the same developer, shares many gameplay similarities with Another Code, and is set in the same fictional universe, yet in a different time. Plus, the Another Code series was aimed for more teenage audiences, Hotel Dusk is aimed for more adult audiences, although has content suitable for teens due to its Teen rating. Hotel Dusk features a gritty narrative, although does not feature any graphic or extreme violence, with the exception of characters being clubbed in the head and knocked unconsciously and a part where the protagonist can die of suffocation if a puzzle is not solved in time.

Hotel Dusk is a hybrid of a visual novel game and an adventure puzzle-solving game. The Nintendo DS is held by its side, as if it were a book, and the two screens show characters looking at each other. The environments in the game are in full 3D and the player navigates Hotel Dusk in a first person perspective. Players will need to collect useful items, but they need to be careful as doing suspicious activity can get Kyle kicked out. During confrontation scenes, the player needs to select the right dialogue options in order to get through the section.

Hotel Dusk stars Kyle Hyde as the protagonist, a 33-year-old ex-detective who works as a salesman for the company, Red Crown. He quit his former job after he shot his partner Brian Bradley in 1976. He shot his friend because Bradley betrayed the police department to the criminal organization, Nile. However, Kyle knew that Bradley wasn't killed by the bullet from his gun and searched for him since then.

On December 28, 1979, the boss of Red Crown, Ed Vincent, orders Kyle to drive to Hotel Dusk, where he has to receive a package with the instructions. On the way to the hotel, Kyle sees a lone young woman in a white dress wandering the side of the highway. In the hotel, Kyle meets many people that confront him with their own stories and at the end, he finds out the reason behind Bradley's act.

Hotel Dusk contains three endings, as well as two variants of a post-credit scene. It is unclear what the requirements are for each ending, although it is commonly believed it has to do with the amount of game overs a player receives, as well as the method by which the player wakes up Mila (poking her face, closing the DS, or blowing into the microphone).

In a post-credits scene, a certain young woman will visit Dunning. There are two variants:

The game consists of 10 chapters that take place during the course of one night.

The music in the game was composed by Satoshi Okubo and Yuhki Mori. There was no official soundtrack for the game, although fans ripped it and used the song names from the jukebox.

Hotel Dusk received generally positive reviews, although some critic reviews were somewhat mixed, with some 6/10 and 7/10 reviews. Despite this, the game has a 8.5/10 user score on Metacritic. 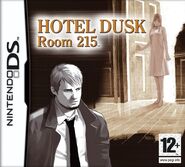 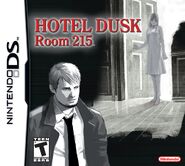 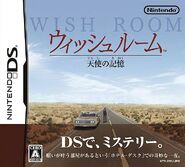 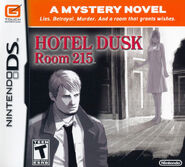 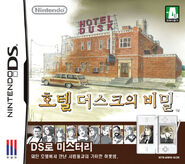 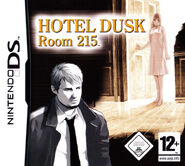 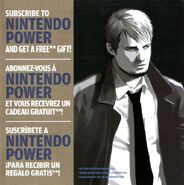 Kyle Hyde's sprite (Left) is more roughly drawn than the finished game, and the viewing slider (Right) is akin to a ruler, unlike the final design, which is more consistent with the overall interface.

The notebook (Menu) button is missing, and the buttons along with area name are in opposite positions. The area name uses a different font, and also specifies the floor.

Kyle ordering Melissa to pick up her puzzle pieces.