Another Code Wiki
Register
Don't have an account?
Sign In
Advertisement
in: Article stubs, Characters, Another Code: Two Memories,
and 4 more

Ashley Mizuki Robbins (アシュレイ・ミズキ・ロビンズ, surname sometimes spelled Robins), called Ash by her friends, is the protagonist of the Another Code series. She was born in 1991 on a date decided by when the player's birthdate is. She is the daughter of two scientists, Richard and Sayoko Robbins. She is an only child. The Another Code games center on her, as she tries shed light on mysteries surrounding the past. During her journey, she gets to meet and help other people, such as Daniel Edward and Matthew Crusoe.

When she was three years old, a man named Bill Edward murdered her mother, Sayoko who previously stopped her work at the Another project and the memory research in favor of her family. Afterwards, Ashley's father gave his daughter to his sister, Jessica Robbins who raised Ashley. He wanted to continue the work on the Another in order to read Ashley's memories, so that he could discover who murdered Sayoko. Two days before her fourteenth birthday, Ashley received a package with an invitation from her father whom she believed to be dead. He wanted to celebrate his daughter's birthday on Blood Edward Island.

In Another Code: Two Memories, a day before her 14th birthday, Ashley receives a letter from her father, who she believed was dead, accompanied with a device called Dual Another System (DAS). He invites her to the Blood Edward Island, where the two can finally be reunited. Ashley goes to the island, but with her father nowhere to be found, she eagerly wanders around trying to find him. She meets a ghost named D, and together they try to solve the mysteries behind D's past, and Ashley's parents.

Ashley appears as a trophy in Super Smash Bros. Brawl, which is unlocked after playing 100 hours of the game. She also appears as two stickers, being "Ashley" and "Ashley Viewing DAS" The description for Ashley's trophy is shown below:

"A black-eyed, unique 13-year-old girl raised by her aunt, Jessica, after her parents disappeared in an accident when she was three. Her father and mother researched biology and memory, respectively. One day, Ashley receives a package from the father she had assumed was long dead. Hoping to meet him, she travels out to Blood Edward Island with Jessica."

Another Code: R - A Journey into Lost Memories[]

In the sequel, Another Code: R - A Journey into Lost Memories, two years after the events of Two Memories, the now 16-year-old Ashley visits Lake Juliet to camp with her father, after getting invitation from him. As she gets there, she soon finds out that she once visited the place with her mother. Ashley gets to meet with Matthew, a young boy looking for his father, whom she promises to help. The two are set to answer questions about Ashley's late mother and the disappearance of Matt's father.

Ashley appears as a spirit in Super Smash Bros. Ultimate, and has a spirit battle in the World of Light mode. Her spirit uses art from Another Code: R - A Journey into Lost Memories. She is a support spirit.

The battle has the player facing against Isabelle with a Villager that is invisible. The stage is Luigi's Mansion. Villager is a stand-in for D and the stage itself is representing the Edwards' Mansion.

Ashley is a half-Japanese and half-Caucasian teenage girl with white hair and black eyes (portrayed as brown on Another Code: R in-game 3D model). She is seen with a thin build. She bears a remarkable resemblance to her mother Sayoko. Characters in the game comment that she has her mother's eyes. Although her hair color is unusual, it seems to be natural considering that it hasn't changed since she was three (as shown in the flashbacks). Ryan Grey comments that Ashley looks like Sayoko, only her hair color was different, suggesting that it is natural. She wore a red and white raglan shirt with short sleeves, dark gray jeans, hale navy sneakers and black sweatbands in the first game. The sequel shows Ashley wearing a red tank top that has the design of a white flower on her chest, a necklace, dark blue pants, red shoes and the same sweatbands.

Ashley is a honest, sensitive, sincere tomboy and a emotional teenage girl, but has incredible strength of heart. She is very well mannered (most of the time) and makes friends easily. By the age of 16, she had developed a strong passion for music.

Ashley's has a complex relationship with her father, and as a result has complex feelings towards him, particularly in Another Code: R. Although she very much loves him, she cannot stand his treatment of her, which she considers selfish. One of her major flaws is her inability to control her outbursts when around him. Particularly after meeting him for the first time in six months, she could think of wanting to do nothing but shout at him. Although she seemed to be aware of her need to "try harder" to control these urges. When it came to her father, she could also be closed-minded, and often failed to see things from her father's point of view; she was often shocked whenever she found out deeper aspects of her father's personality, or his life, beyond the "workaholic dad" image that she had of him, such as his love of their shared love for music.

Ashely is upfront with those she doesn't like. When she first met Elizabeth she couldn't stand her "childishly bratty" attitude, and hated the idea of being friends with someone like her. Despite this, she still attempted to help Elizabeth with her family problems later on, and the two ultimately got onto friendly terms.

In Another Code: R, some of Ashley's certain aspects of Ashley's personality and character can depend upon player choice, during response prompts. For example, whether she is willing to lie about her age, and how willing she is to instantly trust certain characters. Ultimately though, Ashley's general personality traits remains the same, regardless. 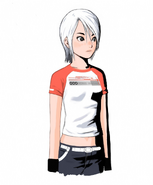 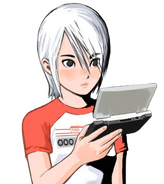 Ashley with the DAS in Another Code: Two Memories. 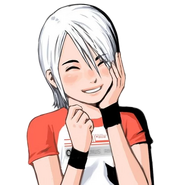 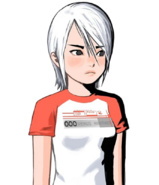 Another Code: R - A Journey into Lost Memories[]

Ashley in Another Code: R - A Journey into Lost Memories.

Ashley in Another Code: R - A Journey into Lost Memories.

Ashley's Model from Another Code: R - A Journey into Lost Memories

Ashley as a character trophy in Super Smash Bros. Brawl.

Ashley wearing a kimono in a New Year's drawing by three developers of Cing.

Grown up Ashley drawn by Taisuke Kanasaki in 2019

Grown up Ashley drawn by Taisuke Kanasaki in 2019

Grown up Ashley drawn by Taisuke Kanasaki in 2017

Grown up Ashley drawn by Taisuke Kanasaki in 2017

Early Design of Ashley #2 (she is seen on the top left again, top right and bottom right) 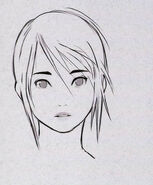 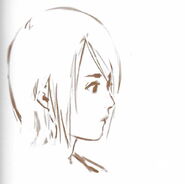 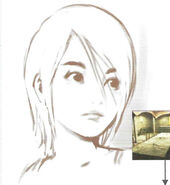